Why You SHOULD Charge For Spiritual Services 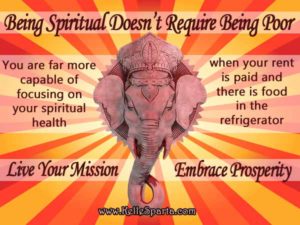 I hear it all the time “I don’t think it’s right to charge for spiritual services”.  The argument is that it’s a gift from the universe that you are charging money for – something that can help the world and you’re holding it hostage for cash.  But let’s look at that argument for a moment.

Do We Value People’s Talents and Compensate Them With Money?

Does this argument hold water when help up against other “gifts”.  If you were a painter, artist, brilliant scientist, insightful mathematician, or anything else that is an inborn talent which has been honed over years of effort, would you expect to get paid when what you do added value to those who received it?  Yes.  Of course!  We don’t only pay people for the stuff that no one wants to do – we pay them for their gifts.  And if they are famous, we pay them ridiculously well.  So why are your gifts in the spiritual arena any different than say, a talented actor or sports star?

Does Not Charging Actually Result In More People Being Served?

Does not charging for your gifts actually result in you sharing them with more people?  After all, isn’t the purpose of having a gift to use it for the benefit of as many people as possible?  The premise of the argument is that if we charge for our services, then fewer people can have access to them.  I have found that in practice, the exact opposite is true.  Those who don’t charge for their services, have to hold down other jobs.  They don’t have the time or money to be able to promote what they do, which means that no one knows that they can do it, which means that they only manage to serve maybe 10-20 people per year.  Whereas people who DO charge for their services are doing it full-time, constantly letting people know they are available, paying for advertising to boost their signal, publishing blogs which are read around the world, and sharing their insights with hundreds, thousands, and even tens of thousands of people per year.  Isn’t that a better use of your gifts?

Does It Make You Less Spiritual To Accept Money For Your Services?

Inherent in the comment that you shouldn’t charge for spiritual services is this subtle insinuation that accepting money for the work taints it because money is inherently dirty and/or because you can’t be trusted to give appropriate information if money is attached to it.  First I want to say that money isn’t dirty.  It’s potential energy that amplifies whatever it is associated with.  If that thing is positive, money takes on that energy, if it’s negative, money takes that on as well.  Money itself is neutral.

And as for whether you can trust what someone says who is charging for their services, well is a simple way to handle that. Don’t make the payment dependent upon the message.  And if you can’t trust yourself to be a clear channel when you’re being paid, well then you probably shouldn’t be offering your services at all because keeping a clear channel is part of doing the work – period.

This is one more argument about not charging – the concept that there is something noble and clean about being poor.  Having been both poor and well-off, I can tell you, being poor sucks.  It didn’t make me more spiritual.  It made me more panicked.  I couldn’t focus on being a clear channel because I was too worried about making rent and putting food in the refrigerator.  The idea of renouncing all your worldly goods and trusting the universe to take care of you is a valid one.  I’ve given away everything I owned twice in my life.  It’s good for taking away attachments.  I’ve also been on walkabout with next to no income living on the kindness of strangers.  It teaches you to trust the universe.  But it is impossible to have a solid life with long-lasting connections when you live this way.  There is no place to call home and nothing that is yours.  It is a very hard way to live and totally unnecessary for most people.    I have been more spiritual and more in tune with myself and the universe when I’ve had the resources to take retreats, to buy books I wanted, to spend some time in silence without worrying that I didn’t have rent for the month and so I should be doing something about that rather than sitting on my butt listening to the silence.  For most people, survival mode is directly contrary to being more spiritual.

What Is The Karmic Cost?

What I never see people talk about is the karmic cost of giving away your services for free.  After all, if you’re any good (and you know you are), the work you offer is life-changing.  If you give away that level of value without taking anything in exchange, you are creating a karmic debt for the person.  It is at best co-dependent and at worst manipulative in forcing someone to take on a debt they cannot repay in this lifetime.  Energy has to find a balance.  If you’re providing great value and taking no payment in return, the energy cannot balance itself.

Now are there times in the world where you do something because it needs to be done rather than because someone is paying for it?  Yes.  But that should be your 10% tithe, not your default mode.  That 10% can go out into the world and come back to you in other ways.

The real secret behind this belief is that it’s designed to keep lightworkers from doing their work in the world.  It’s an excuse for them not to step up into the global arena.  It keeps us all – as a world – smaller.  I would put it to you that it is your DUTY to charge for your services so that you then have the resources to share your gifts with more people.  After all, a priest doesn’t work for free – the church takes those donations and uses them to pay a salary so that s/he can focus on doing the work of watching over the spiritual life of their parish.  A shaman isn’t expected to participate in hunts or in food gathering or hide tanning, all of this is handled for them, so that they can focus on communing with the ancestors and reading the omens.  The more time you spend doing your laundry, going to a job, doing your own marketing, etc., the less time you spend doing the spiritual work that is your true calling.  Why WOULDN’T you want to have the funds to hire people to take care of these tasks that distract you from your true work?