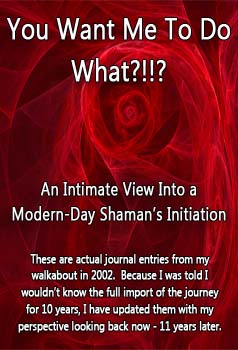 I’ve sat here for most of two days now doing not much other than checking email, eating, and watching DVD’s that randomly skip to other parts of the movie at odd intervals. Such a reflection of my life at this time. I can’t seem to get my mind around the changes I’m about to make in my world. Getting a job, getting an apartment, becoming stable again. I’m feeling trapped. Stuck.

At first, I thought I was depressed. Stuck here not getting any further towards my goal. Partly due to the fact that I forgot my resume stuff, partly because all the job postings didn’t come out until today, partly because it’s the weekend and I really can’t get anything done on the weekend and finally also because all the people I’m supposed to meet with while I’m here seem to be blowing me off for the weekend. Add to this that I’m missing Daniel and why not be a little depressed? But today I’m realizing that it’s more than that.

At first I thought it was stuff having to do with Daniel because that’s definitely wigging me out at times with how it’s all falling together so easily. But that’s not it at all. I realize that it’s more to do with the life I’m building. The last time I was this intentional about putting a life together, it was when I got married. I got really stuck for seven years there. I’m terrified of getting stuck again. I know that I can just change it again if I don’t like it now, but I’m still there. I understand it, but I don’t KNOW it.

This low level panic is really starting to get to me. My acid reflux has returned and I haven’t seen that around since I left for walkabout. I’m sleeping better, but that’s just an avoidance mechanism. Somewhere in the back of my throat is this threat of hysterical breathing, of losing control completely. Not pretty. Damn. Well, I’m going out for a while this morning to return the DVD’s, perhaps I can catch Keter on the phone to talk it out some more. This is as far as I can get with it alone.