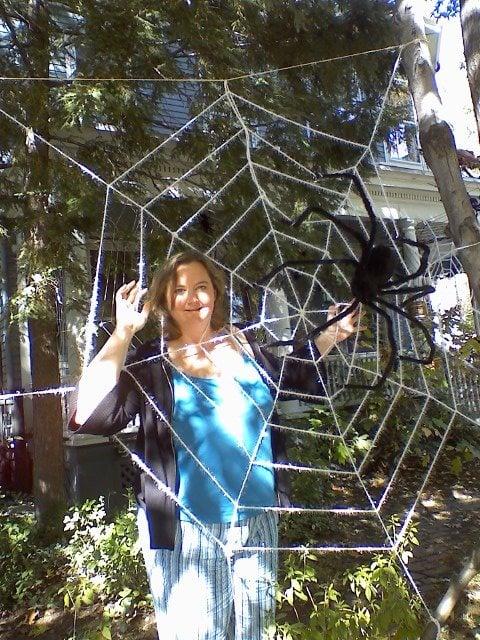 This is part 7 of my spiritual journey to becoming a shaman.  See part 1

Grandmother Spider Is Calling You

One night, I went into the basement of the Magickal house to find something I had stored there.  The light was on a pull string in the middle of the room, so I had to do a trust walk into the room and feel around for the pull cord because it was way dark down there.  I walked a couple of steps into the room and felt a spider web break across my face and body.  I decided that I didn’t need whatever I was looking for badly enough to get it in the dark with spider webs everywhere, so I went back upstairs.

The next morning, I went back down to get whatever it was I was looking for (I can’t remember now what it was).  When I got to the room, I realized there were no spider webs anywhere in the room.  This made me realize that when I came up the stairs the night before, there had been no spider web on me – despite my clearly feeling that it had been a big web that I had plowed through, so it should have been all over my clothes.

I mentioned this to my housemate (and shaman) and he said “Grandmother Spider is calling you.  You’d better listen before she does to you what she did to me.”  I had no idea what he was talking about, who Grandmother Spider was, or what it meant to listen to her.  I asked him to tell me what he meant.  He told me that when Grandmother Spider had called to him, she had a spider’s nest hatch over his bed in the middle of the night and all the baby spiders came and feasted on him.  I agreed that this was an experience I did NOT want to have.

He went on to explain that Grandmother Spider was a spinner and a weaver, and an access point to time, fate, and creation.  In short, a pretty heavy duty totem. (So heavy duty in fact that some cultures say that spider can’t be a totem.)  We discussed what a totem animal was and how it worked and I realized that spider was not the only animal that had called me.  Snake and turtle had also been calling me my whole life but I had no idea how to recognize the signs.  Snake is another animal that many cultures/tribes don’t recognize as being a totem because of its transformational/rebirthing/massive change properties.  So now I realized I had two massive totems, plus turtle who is what holds up the world.  No pressure. ACK!!! (Insert “Holy shit, I’ve got a HUGE mission, what the fuck am I gonna do?” here.)

This one really put me into research mode on what totems are all about, what shamans are (I still had no idea) and what I was supposed to do about it.  I will tell you that having live-in shamans is really helpful when this stuff happens.  Clearly I wasn’t going to get the message on my own since I had been getting messages since I was as young as 3-4 years old and perhaps younger (that’s the earliest age I remember) and hadn’t figured it out in over 20 years.  I guess that spirit decided the short bus was in order and set me up for private tutoring.