A Ghostly Presence – How I Became a Shaman, Part 4 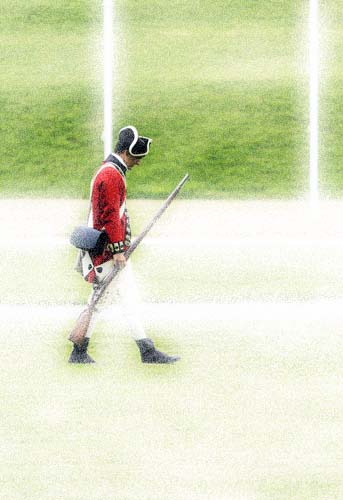 This is part 4 of my spiritual journey to becoming a shaman.  See part 1

Over the years, I’ve seen/felt quite a few ghosts.  But until I learned how to deal with them, they would sometimes scare me. (Evidently this is a learned response since my mother never mentioned me having a bad reaction to the ghosts I was talking to as a toddler.)  But I remember seeing a ghost when I was 16 and in bed.  I am blind as a bat without my glasses but I opened my eyes and saw clearly a man standing at the foot of my bed who was dressed in wild west clothing (I was living in southern CA at the time).  He was clear as day despite my myopia so I knew he wasn’t “real” and if I had any question of that it would be proved the following moment when he realized I could see him and the hop half of him disappeared leaving only his legs standing there.  I took the age-old approach of “if I can’t see you, you can’t see me” and dove under the covers hoping he would disappear completely.  By the time I came out from under the covers he was gone.

So when I moved into my new house that I bought all by myself after my divorce, I was thrilled.  I had felt like this house called to me to buy it.  I hadn’t had any intention of purchasing a house, but when I was looking at new listings for my real estate clients. it spoke to me and told me to buy it.  So I did.  On my first night in the house, I laid down to sleep and suddenly the bed was shaking.  I jumped up.  I went down to the basement to see if the furnace had turned on – it hadn’t.  I went to look at a map to see if there was a railroad running anywhere nearby – there wasn’t.  I tried to think of anything else that might have caused that experience but being that I was now in CT and not in CA where I could have blamed it on an earthquake, I had nothing to attribute the experience to.  So I went back to bed thinking that perhaps I had dreamed it, know full well that I hadn’t even had a chance to start to go to sleep much less start dreaming, but I had to do something to keep from running screaming from the building.  I laid back down again and the bed started shaking again.  I tried my old go-to of pulling the covers over my head but it didn’t stop.  I must have started whispering “please stop” because suddenly it did.

I was taking a class with my Reiki master teacher/shaman and so I asked her what to do about this problem.  She explained that it was my house, so I had the right to ask the ghost to leave.  I didn’t want to do that since he had clearly been there longer than I had.  So she suggested that I talk to him and work out a solution.  Turns out he was a perfectly reasonable ghost.  He had been part of the Revolutionary War massacre that had happened across the street from my house at Fort Griswold.  He didn’t want to scare me, he was just lonely and wanted some company.  We agreed that he wouldn’t shake my bed anymore unless I forgot to talk to him.  And we had a lovely relationship for the rest of the time I lived there.

(Update Dec 2016, I was recently back in CT and was drawn back to my house.  It was in sad shape and was energetically challenged in a big way.  My friend and fellow shaman Kathy was with me.  We did as much clearing on the house as we could without impinging upon the current owner’s rights.  When you get a request from the house and the house ghost, you have to honor it.  It’s still challenged now, but it’s better than it was.)