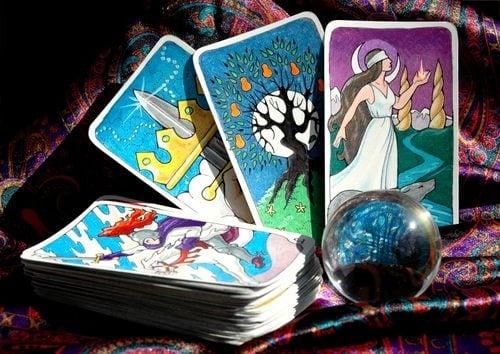 This is part 3 of the series on my spiritual journey of becoming a shaman.  Start the story here.

Surprise! You’re Really Psychic.
You’re Not Just Making It Up!

As a shaman, I bring a lot of gifts to the table.  I’m a psychic, a healer, a channel, and a medium as well as a pretty damn fine coach on personal power and self-love issues.  Each of these skills came with some surprises attached.  But none was more surprising to me than proving to myself that I was psychic.

My mother knew I had abilities since she would always tell me that I was talking to ghosts in my crib.  She had been psychic and had shut it down because she was scared of it, and she didn’t want the same thing to happen to me.  So I grew up studying metaphysics, occult, tarot, runes, psychic abilities, personal growth, self-hypnosis, and more.  I had taken psychic training in my teens and had one really cool experience of it, but I had written it off as a fluke.  Every time I had read someone’s mind over the years, I had convinced myself that it was just an educated guess.  So while I was happy for others to think of me as a psychic, I didn’t think of myself as one.

And then came the fateful day that a friend of mine from the Spiritualist Church called me in a panic saying that his instructor for his class that evening had cancelled last minute and was there anything I could teach for 2 hours to his class to fill in?  I had been studying shiatsu for a while, so I offered to teach a class on that.  He gratefully accepted.  So I came in to teach to a group of people I’d never met everything I knew about shiatsu. After about 90 minutes, I ran out of things to say.

I was at a loss for what to do from there.  So my friend said “well you can just do readings for people for the rest of the time”.  I protested.  I couldn’t do that!  I didn’t have any tarot cards with me!  I didn’t do cold readings!  He pointed out that I had been giving people additional information from the readings they had gotten during church mediumship for months and that this was cold reading.  He pointed out that I had told him things about his childhood that I had no reason to know except that I was reading him.  I was unconvinced.  But the people in the room were excited to get readings.  They wanted me to do them.  And I didn’t want to let them down (especially since I had already done so by running out of material on shiatsu).   So I said “ok, I’ll do this.  But only with the understanding that everything that comes out of my mouth is probably wrong.”  They readily agreed.

These days it’s unusual for me to remember anyone’s reading even a few minutes after I’ve finished it.  But the readings that day have stuck with me over the years because each time I was right it rocked me to the core of my being.  They are emblazoned in my memory banks.

I started with the woman on my right.  I looked at her and said, “you’re the sole caretaker for an ill family member.”

She nodded that this was correct.

I told her that she was tired and overwhelmed and really needed a break but she felt like there was no one else who would step in and so she had to continue.

I said “there is someone else in your family who will step up if you quit.  They really don’t want to, so they aren’t going to tell you that they will, but if you quit, they will step in.  I want to be clear, you can’t just ask for a break, you have to actually give over the responsibility entirely.  Only then will this person reveal themselves.”

She said she found that knowledge comforting and would keep it in mind.  She said it helped her not feel so trapped by the circumstance.

The next person was a man who was totally blank to my awareness.  He said “Don’t take your ability to read me or not as an indication of your skills.  I’ve had people – some really famous psychics – try to read me and no one can.”

This comment piqued my curiosity and made me wonder when, where, and how he might have constructed a shield so strong that no one could see through it.  In a moment, I saw him at 5 years old and watched him construct the shield.  I described the process for him and told him that if he ever decided to take the shield down, that this information would make it a lot easier to do so.  He was stunned.  No one had ever been able to give him any information before.  I tried not to think about that too hard, I was scaring myself and if I thought about it before I finished the readings I had agreed to do, I might have run from the room.

The next was a blonde woman who desperately wanted a reading, but she was afraid I would tell her something she didn’t want to hear.  When I came to her, all I got was terror.  I couldn’t read her through the wall of fear.  She said she understood and acknowledged that she was afraid.  Interestingly though, she would project into the other readings the stuff that was hers.  Every time I got confused or got something wrong for the rest of the readings, she would say “that’s mine!”

For instance, the next woman (a brunette) I read had children.  I kept flipping back and forth between two boys, aged 7 and 9 and twin sons aged 19.  The woman I was reading said hers were the boys 7 & 9 and the terrified woman said “the twins are mine”.  Then I told the brunette woman that she was planning two trips that summer, one camping with the boys and one was a marital retreat with her husband.  She agreed this was true.  I got a little more unsure about the next piece of information and asked “you’re going camping in Niagara Falls?”  she said “no”.  The blonde woman piped up saying “we’re going camping in Niagara”.  I nodded and turned back to the brunette woman.  I told her that at the marital retreat things would get worse before they got better but they would get better.

The next was a man who was dressed like a corporate executive.  He had on khakis and Docksiders and a button-down shirt.  I looked at him and in amazement I said “you paint”.

“For a living”, I continued.

He smiled and nodded again.  “I’m a house painter” he said.

I looked all over his clothing and shoes for specks of paint – anything that could have tipped my subconscious mind off to the fact of his job as a painter.  Nothing.  Not one speck.  I was floored.  But there was no time to consider it.  I had to continue the reading.

I described a blonde woman with curly hair who kept floating into my awareness as I looked at him.  He said “that’s my ex-wife.  She just called me out of the blue for the first time in 20 years.”  I gave him a few more comments (which I don’t remember now) and finished up the readings for the day.

My friend and the attendees were all very pleased with the experience.  I was a bit shell-shocked.  I had no idea that I could do that sort of cold reading nor did I know that I could be so accurate.  I had painted myself into corners listing ages and talking about locations and giving information that could be disputed.  And I had been right.  My brain was exploding as I tried to integrate this new concept of me as a psychic.

It would be years before I truly accepted the extent of my gifts.  I would slowly embrace more and more of it – allowing my identity to expand to accept each new level.  But it took a long time of being on my spiritual journey for me to truly allow it in.

Read The Next Part of the Story