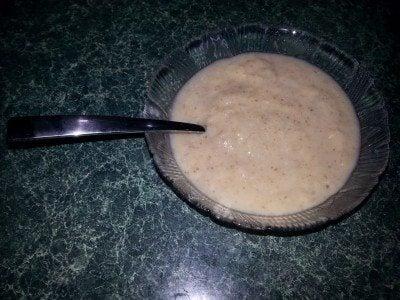 This evening, we had some leeks and some mushrooms that we had gotten at Boston’s Haymarket needed to be cooked.  (This is often true since Haymarket is the place where wholesalers come to sell off the food they couldn’t sell to the restaurants that week.  They sell at a deep discount because the food must be eaten quickly or it will go bad.  We get most of our veggies there.)

I had planned on making a basic potato leek soup, but with the mushrooms needing to be cooked, I decided to add them in.  This necessitated changing the spices since mushrooms have their own flavor.  Here’s what I did:

Peel the potatoes and dice.  Brush the mushrooms and slice.  Chop and wash the leeks well.  Put the chicken stock, leeks, potatoes, and mushrooms in a 2-quart stock pan over medium high heat.  Add all other ingredients except the parmesean cheese, sea salt and black pepper.  Bring up to a simmer then reduce to low heat and cook for 30-40 minutes until the potatoes are tender.  Use an immersion blender to blend the ingredients into a smooth soup.  Then add parmesean cheese, sea salt and black pepper, to taste.

Do NOT leave out the butter from this recipe.  The seasonings need some fat to draw their flavor out.