Forgiveness Is Great… AFTER You Get Angry 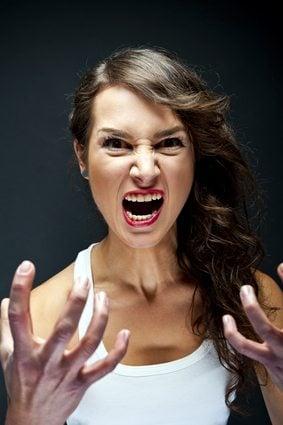 This article was inspired by Fuck You Spiritual People For Using Gratitude As A Bypass To Your Anger.  It’s an awesome article and you should read it too.

A few years ago, I went home to visit my mother.

I had been really angry with her for many years, but hadn’t admitted it to myself.  I knew that she frustrated me with her victim mentality, but I didn’t realize the well of rage that I had stored up towards her.  I didn’t let myself admit that it was there.

My mother was a smoker and I am allergic to cigarette smoke and have a touch of asthma as well.  So when she asked me to come help her after her hip replacement surgery, I told her that I would only do it if she stayed on the nicotine patch when she got home from the hospital.  Otherwise, I’d be miserable.  She agreed.

The day she got home from the hospital, she lit up a cigarette.  I reminded her about our deal and she said she didn’t have any patches.  I went out and bought some for her.  She put one on and continued to smoke (now risking her life in doing both since that can be deadly).

I went instinctually back into my inner child and felt trapped.  She had broken her word (again).  It was too cold to open the windows and so the smell just began to build each day making it harder and harder for me to breathe.  I retreated to the basement.  At 11pm on the 6th day of my incarceration, I reached out to a friend who reminded me that I wasn’t a child anymore and that I could leave at any time.  I wasn’t required to stay the three weeks I had been scheduled to stay.  She even offered to loan me the money to come home if I needed it.  (I didn’t, I just forgot for a moment that I had the power to use it.)So I went upstairs and calmly told my mother that I was leaving in two days and that she should make her plans accordingly.  Immediately, I felt better.

The day I was leaving, the nurse’s aide who was staying with us decided to clean a window next to me.  The chemicals from the glass cleaner were more than my poor battered lungs could take.  My airway started to close.  I made a mad dash for the front door to find fresh air, streaking right past my mother, who had been a nurse for 30 years and certainly recognized the sound of a closing airway when she heard it.  What do you think her response was?  Was it concern that her only daughter couldn’t breathe?  No.  Her response:  “I wasn’t even smoking!”

As I stood outside gasping for air, flabbergasted that this was what she thought to say, it dawned on me.  She was five years old.  She had been five years old my entire life.  Everything revolves around you when you’re five.  Of course, my not being able to breathe was about her and not about me.  EVERYTHING in her life (and mine) had been that way, no matter what else she had told me over the years.

In that moment, the anger I had for her broke.  You can’t be mad at a five year old for being five.  That’s how old they are.  Mom experienced a major trauma at the age of five and she never managed to grow past it.  She tried really hard, she enrolled us both in countless new age personal growth programs, but nothing worked.  It wasn’t her fault.  I couldn’t be angry at her anymore.

My ride arrived a few minutes later to take me to the airport and I kissed my mother good-bye, told her I loved her, and left.  It was the last time I saw her alive.

I got home and shared this story with a support group I was part of and in the process of telling it I realized that while I was no longer angry at my mother for being a narcissist, I was still VERY angry.  I was angry at the universe, angry at myself for picking this life, angry that I didn’t get what I needed as a child.  I was bullshit angry about my upbringing around my mother and it was the first time in my life I was admitting that to myself.

The facilitator at the workshop encouraged me to do an anger releasing exercise which I resisted because I knew the extent of my anger and the power that it holds.  I knew that my rage could be overwhelming for others and that there were some sensitive people in the room.  I knew that what I was finally releasing was bigger than anything I had unleashed before and that it could be damaging.  And yet he persisted.  And so I finally agreed, giving anyone who wanted to leave permission to go and then I closed my eyes and let loose the anger.  I screamed and cried and broke open the dam to the sea of rage that had been growing for the last 40 years.  And the waves of rage came off my skin as powerful reminders of the pain I had experienced.  And when I had spent the initial tide, I opened my eyes.  Everyone in the room other than the facilitator was laying flat on the floor trying to get out of the path of the waves of anger I had unleashed.  But I finally felt empty for the moment.  I knew there was more to be released later, but the first onslaught had been neutralized.

During the social portion of the evening later that same night, one of the other participants came up to me and told me in her best new age tone that I needed to forgive my mother.  (She didn’t realize I already had.  It was the universe I was pissed at now.)  she reminded me that I wouldn’t be free until I did.  I told her that yes, I did need to forgive, but not yet.  First I needed to be angry.  First I needed to allow myself to feel that I didn’t deserve the life I had experienced.  I needed to tell my inner child that I deserved to be loved and cared for and made a priority.  My health should not be second to cigarettes or alcohol or whatever narcissist was in the room.  I needed my inner child, my subconscious mind, my inner knowingness to know that I deserved all the beautiful things life had to offer and that if I didn’t get them, I had a right to be angry about that.  Otherwise, I might just believe that I deserved the pain and therefore create more to support that belief.

I needed to be angry first.  THEN, once I admitted to and processed the anger, I could begin to forgive the universe for not being there for me and myself for choosing this really hard life.

First you get angry – Then you forgive.  Don’t skip the step that shows you how to love yourself.  I didn’t.