What If This IS Hell? 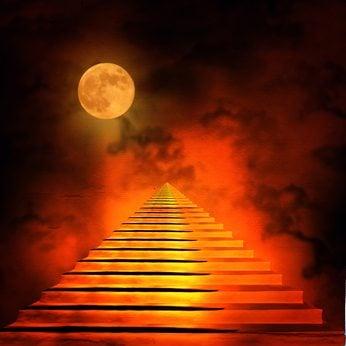 Today, with this clear thought, I went searching again – but this time on the internet.  In the process of searching, I came across a reference to there being 18 levels of hell – which seemed that there might be relevance given that “houses” in dreams often represent the person themselves and the state of their own well-being or (as in the case of my dreams since I was never in my own house in them) realms or states of consciousness.  I started researching the concept of Hell, something I haven’t really done before since it’s not a construct I generally embrace as a shaman.  And it occurred to me in my readings, that much of the descriptions of the levels of Hell represent the emotional issues I deal with in helping my clients.  Add to this that  Pope John Paul II said that Hell is considered to be the state of being separate from God and I have a series of questions for us to ponder today.

What if we are in Hell now?  What if this realm IS Hell?

We are told that Hell is a place where demons feed on the souls of the damned.  As a shaman, I’ve seen and experienced this many times here.  Also that Hell is populated with the souls of the dead.  As a medium, I can tell you, the dead do walk here.  In Mayan culture, Hell is symbolized by Xibalba roughly translated as “place of fear” (Wikipedia).  I don’t know about you, but to my shaman eyes, fear seems to be rampant here – encouraged even.  The media is rife with it.

Our punishments in Hell usually relate to sins committed during life.  But what if it isn’t the traditional form of “sin” we’re talking about but the form represented by the ancient God Sin which is “lord of wisdom”?  This relates back to the Christian concept of eating from the tree of wisdom (the apple) being the downfall of humans.  What if that is the sin we are talking about?

What if the sin is believing that this realm is real?  And what if the belief that one cannot escape from Hell (as is preached in many texts), is what keeps us trapped here?  What if our attachment to the “reality” of this place is what hold us back from rising into enlightenment?

“like all realms of rebirth, rebirth in the Hell realms is not permanent, though suffering can persist for eons before being reborn again. In the Lotus Sutra, the Buddha teaches that eventually even Devadatta will become a Pratyekabuddha himself, emphasizing the temporary nature of the Hell realms. Thus, Buddhism teaches to escape the endless migration of rebirths (both positive and negative) through the attainment of Nirvana.” – Wikipedia

“Nirvāṇa (Sanskrit: निर्वाण; Pali: निब्बान nibbāna ; Prakrit: णिव्वाण) literally means “blown out”, as in a candle.[1] It is most commonly associated with Buddhism.[web 1][2] In Indian religions, the attainment of nirvana is moksha,[note 1] liberation from the repeating cycle of birth, life and death (reincarnation).[3][4][note 2]“ – Wikipedia

It is said in many texts and myths that souls can be destroyed in Hell (here for the purposes of this discussion).

What if the destroying of a soul is the extinguishing of hope, or the loss of cohesion of one’s personal power?

I don’t have answers to these questions as a shaman, I just wanted to share my thoughts with you.  What do you think?  Perhaps a good discussion is what’s needed here…