A Day In the Life of an Urban Shaman 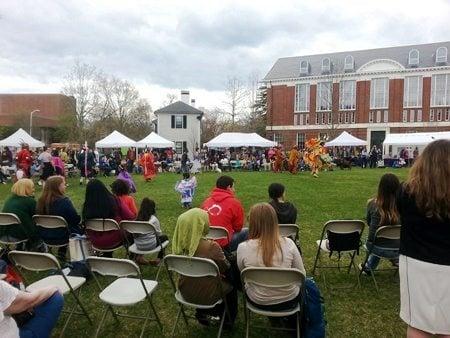 I went to ProductCamp (an unconference for Product Managers) about two weeks ago.  I thought it would be a good place for me to go since I have my own products and I manage them.  I also got a “yes” from spirit when I checked in about going.  Well, after a few hours, it became clear to me that it was NOT my people and NOT someplace I needed to be, so I headed home.

On the T (Boston’s version of the subway), I saw a man with a beautiful boxer dog standing next to me.  I asked if they were going for a walk on the Charles River.  He said, no, they were going to the Pow Wow in Harvard Square.  (For those of you who aren’t familiar with Boston, Harvard Square is the last place I would expect a Pow Wow to be.)  I asked him if I could follow him to the Pow Wow and he said that would be great.  We visited on the walk over and then parted ways so that we could each experience the event on our own.

I stopped in at several vendors and looked at their wares.  Each was friendly and open.  And then I got to George.  He had a booth and was smudging the area.  I kept trying to find something to buy so that I could stay longer.  He kept trying to find something for me to keep talking to me.  Finally we each came clean and just admitted that we wanted to talk to one another.

He looked at me and said “you’re a nurse aren’t you?”

He said “but you’re a healer.”

I nodded and said I was a shaman.

He nodded and said “yes, and a very powerful one.

Dead people talk to you don’t they” he asked.

He went on to tell me a story of a woman he had done a reading for at another Pow Wow the year before.  He said that she came back the next year and almost everything he had told her had come to pass (the rest of was still coming he said).

I told him that I didn’t tend to read the future for people.  That because I carry the energy of change, when I tell people what is coming, it tends to change it, so I didn’t see the point.  Instead I focus on using my skills for helping people see what is up for them now so that they can make positive change in their lives.

He told me that this wasn’t why I didn’t read the future.  He said I was afraid to.  That when I opened up to it, so many people talked to me all at once that it was too overwhelming for me to figure out who was talking to me about who and that because I got overwhelmed I turned it off.  It made me think of the fact that 15 years ago, I purposely stopped looking into my own future and about 13 years ago I decided to turn my psychic skills on and off so that I wasn’t getting so much information about people all the time.  Now I only turn it on when I’m doing a reading.  He was right.  I was mostly blocking my abilities in my day-to-day life.

He said that I was very powerful now, but that there was a whole other level of abilities that I was denying that are blocking me.  But that I would open this up in the next 12-18 months and then my abilities would grow dramatically from there.  And so I’m sitting with this idea and opening up my abilities a little more each day.  Who knows where it will take me?

We finished our conversation and we parted.  As I was walking away he exclaimed “what a loving person you are!  You have such a kind heart!”

I smiled.  Who would have known that spending a few hours at a conference that wasn’t for me, would lead me to exactly the message I needed to hear?  But that’s just how my life is.