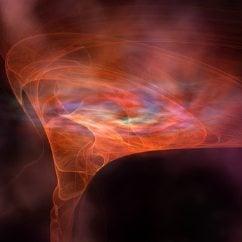 What Follows Is For Advanced Practitioners

Fair warning – this post is not for your average reader. When I was writing it, I had difficulty in trying to explain what in many cases was unexplainable. Language just doesn’t work to hold some of these concepts. So all I could do was try to explain as best as language would allow me. If you are an advanced practitioner of transformational rituals, then you will probably recognize some if not all of what I am talking about. If you just stumbled on to this blog from some unrelated place, you probably won’t read much further and you will probably think I was high when I did this (I wasn’t).

In my tradition, when a practitioner reaches a certain point in their evolution, they can choose to “ground a vortex”. For us, this means that we must create a ritual that passes through both the light and the dark gates of this particular reality to arrive at an alternate plane, another level of reality. The gates lead to the level of reality where the energetic construct or force resides that defines the foundation of our current level of physical existence.

If This Sounds Crazy To You, Please Don’t Continue

OK, I know. At this point, some of you are thinking that this all sounds like a bunch of crazy mumbo-jumbo. And if that is where you are, please go click on something else. The rest of this is not for you. But if this sounds at least interesting or even intriguing, then please keep reading because I actually did this, and it was one of the most profound experiences of my life.

After Preparing, The Next Step Is To Begin – And Be Open To What Happens Next

In preparation for my journey, I spent several months doing ritual, working with guides, spirits and archetypes to discover the gates that I needed, the ones that were right for me. And then one day when I was ready, I set everything up, created safe and sacred space, and started to go through them. First the gates of light – earth/mother, fire/father, air/child, and water/spirit. Then the gates of darkness in the same order. Ultimately, I stepped out onto another plane of existence, one that seemed to stretch forever in all directions. But I also saw a huge pillar of rainbow colored living flame some distance away that drew my attention and called me to It. As I got closer, I realized just how big It really was. It was massive! I have never stood before anything that large – no building, no mountain, nothing in my own world even came close. I was like an ant at the base of an ancient redwood tree. It was amazing.

I felt Its essence as that of unconditional love, and it was emotionally overwhelming to stand in that presence and feel It, knowing that It knew everything about me, and loved me totally, without limit and without judgment of any sort. I slowly allowed that energy to permeate me until I knew myself as both myself and part of It. Then I waited to be allowed to ask questions. And eventually the energy of permission was given to me.

My First Question – What Does This Mean To My World?

I understood that It was Unconditional Love on a universal level. But I didn’t understand what that meant to my world, so I asked that question first. The answer was that the foundational energy of our world is unconditional love – not fear, not anger, not hate, not greed, but love. But that we have so buried that truth beneath all our pain at feeling separated from It – which is a great lie – because we have never been separated from It – that we cannot feel this truth anymore. We live in our painful illusions and believe the illusions to be true.

My Second Question – What Does This Mean To Me?

I had previously received a message from Spirit about my mission in the world – to restore the flow of unconditional love. I had initially rejected this message as too big, not me, not possible. So for my second question, I asked if this was truly what I was in the world to do. The answer was that I first needed to restore my own connection to love, to break through the illusion, and then to live in such a way that love was restored and renewed within me. And then from that place, love could flow freely from me to others.

My Third And Final Question – Can I Be A Part Of This?

And then I came to the question that I was most afraid to ask, but for which I was ready to accept whatever answer was given. I asked if I could bring back with me into my world a connection to It, a tendril of It which would be like a river of unconditional love to me. I was afraid because I felt like I was presuming a lot – to ask for an actual piece of It, to be connected at one end in my temple space and at the other end directly to It. Literally a living breathing fractal of It within my sacred space!

I wasn’t actually expecting a positive answer. But I knew that unless you ask, the answer is always “no”. So I asked, and much to my amazement, the answer was “yes” – with caveats. I would be allowed to bring a tendril of It back with me into this world, but I needed to tend It and steward It properly – because It was there of Its own choosing. And if I did not pay attention and did not do my work, It would release Itself from my space and return to the great plane where It resided in all Its fullness.

After You Ask, Do The Work

So a piece of It uncoiled from the base of the great column and attached Itself to me. As I passed back through all the gates, It stayed with me. Once I returned to this world and my own temple space, I made a place for It to connect to and then provided shields so that Its energy would not be too overwhelming in my living space. And It has continued to stay connected and I have continued to work with It over the intervening years.

The Power Of Unconditional Love To Transform

I don’t know if I have fully restored and renewed the flow of unconditional love within myself sufficiently to truly be a source for others. But I do know that life has been very different for me since that experience. The power of unconditional love to create change in my life has been profound. And if It can do this much for my life, then I have great hopes for what It can and will manifest in our world as more and more of us find our way through our own gates of light and darkness, and into connection with Unconditional Love.

Please post your comments, insights, and feedback here. We love to hear from you!