Fear and Personal Power in Duality 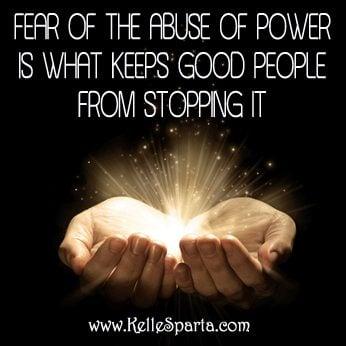 I’m going to be writing two articles on fear and power from two VERY different perspectives – duality and union.  Today’s article will be from the duality perspective.  The next one will be the same article but from a perspective of union.  As we step forward into this new world paradigm, it’s becoming more and more important to have these conversations in multiple dimensions.

Is Personal Power The First Step To Leaving The Light?

I’ve seen so many incredibly powerful people hamper their own abilities because they don’t trust themselves.  Somewhere along the line they did something out of spite or just to test their power to see if they COULD do it and they crossed a line.  That one transgression (or a series of transgressions in adolescence as they were testing their limits) has caused them to shut down their power out of fear that they will hurt someone with it.  There are two problems with this argument.

Railing Against the “Abuse” of Power

Now I know that there are a bunch of people out there right now having read that last point who are screaming at their computer screens that abuse of power is never OK.  This is coming from the victim space inside you.  I say this because power is a tool like anything else.  If everyone stood in their power, then everyone would be responsible for themselves and then real “abuses” of power would become much more rare and would last much shorter periods of time as those who witnessed stepped up and said “no” to the abuse.  The problem in our world isn’t those who abuse power.  The problem is those who play the victim and refuse to claim their own power.  You do not get to whine about someone else using their power over you if you refuse to own your power over yourself.  Power goes to the person willing to claim it.  It’s that simple.  You may not like the answer, but it doesn’t change the truth of it.

Who Can Be Trusted With Power?

So with those two things being true, how do you determine whether you can be trusted with power?  It’s all about your belief in whether you are a good person or not.  If you believe that you’re not a good person, then you’ll be worried about stepping into self-serving attitudes and dominance over others.  If you believe that you are a good person, then you are much less likely to fall into these traps.  But the truth is – you just can’t know.  I mean, seriously – even Hitler thought he was doing something good for his country and his world and look what he did.  We all do the best we can.

Loving Yourself is the First Step to Loving the World

If you want to reduce the chances that you’ll act unconsciously out of self-interest to the detriment of others around you, then you have to learn to love yourself first.  I know that this seems like an oxymoron, but in fact, the love of self is the foundation for the love of others.  If you do not love yourself, you do not feel lovable.  If you do not feel lovable, then you manipulate others to try to steal love wherever you can.  You also try to control other people’s perceptions so that they don’t realize you are unlovable and shun you.  It’s also a reason why people hoard power – in the attempt to guarantee that they are necessary to the group and/or to force people to value them – even as they cannot value themselves.  The lack of self-love is the underpinning of a lot of manipulative, power-abusing behavior.  When you learn to love yourself, this behavior becomes irrelevant.

Balancing Self-Love And Love Of Others

The other challenge of wielding your power with integrity is that of balancing your self-love with the love of others. Many spiritually powerful people do a crappy job of that.  They tend to sacrifice themselves in favor of the greater good when it is not necessary.  This causes them to feel empty and abandoned by the world they serve and this is where manipulative behavior arises – in the attempt to refill over-empty energy reserves.  If you do a better job of taking care of yourself and allow the world to take care of itself more, then you will find that you have a more balanced approach to life and power in the long run.

It’s Not Power That Causes Abuses – Triggers Do

When we learn to own our own power, we learn to own our own triggers too.  It is these triggers that cause us to act out, to abuse our power, to manipulate and control.  When we walk through those issues, we find more inner peace and we feel the need to use our power over others less and less.  When we are no longer trying to “get” something from the outside world that we feel we are lacking within, then there is no need to abuse power.  And yet, if we don’t lay claim to our power in the first place, we never have what we need to get through the hard work of removing the internal buttons that cause us to be triggered.

So in short, it is the fear of the abuse of power that causes it.

I welcome your comments below.

(Side Note – Just after completing this blog post, I went out for a walk.  It was the middle of rush hour and tensions were high.  Someone evidently cut someone else off and the offended party got out of his car to yell at the car that cut him off and was already speeding away.  He got back into his car and floored the gas pedal, spun his wheels and almost ran into a pedestrian that was crossing the road.  If it hadn’t been for the pedestrian’s quick reflexes and breaking into a run, he would have been in the hospital.  He then proceeded to run a red light and continue at twice the posted speed limit.  I got his license number and called the police.

I have to wonder if this person would have felt differently about being cut off if someone at home had said “I love you – you’re important to me” before he left.  Or, more importantly, if he had said it to himself.  This is a classic case of abuse of power (using a vehicle as your form of aggression release).  And while I hold the man in compassion, I also had to stop him from causing more damage in his anger.  I’ll admit, I just want to hug him, rock him and tell him that he is loved.  I also realize that this could be dangerous because he has begun to use his power to support his negative belief structure and any challenge to that could be met with violence.  Power is a dangerous thing when wielded by unconscious people.  Want to be safer in your power?  Do everything you can to wake up.)