Powerful Ritual Of The Divine Feminine – The Journey 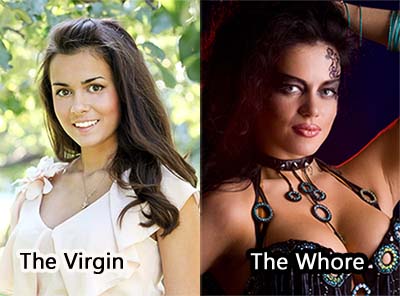 Reuniting The Virgin And The Whore

[For the foundation elements of this ritual, first read Powerful Ritual of the Divine Feminine – The Foundation.]

At LumensGate, the ritual began when two separate altars were established, one for the Virgin, and one for the Whore. On the altar of the Virgin, there was part of a statue of a woman, just the head. We had to prop it up with a pole when we were building the altar, as synchronistically we discovered that the Virgin could not stand on her own. The other half of the statue was placed on the altar of the Whore, a voluptuous body of a naked woman. The altars were set up early in the day that the ritual was to be performed to give the participants a chance to connect with the powers we were working with. I asked the participants to help decorate the altars with their power objects, and to put offerings on the altars as well. I was borrowing the Hindu puja technique, where people invest their deities with honor and power through the practice of offerings, prayer, and prostration. As the participants related to the altars in this way, they began to access these deities within themselves.

I asked each person to write down on a piece of paper that was in a bowl at the altar, all the names she/he knew the Virgin and the Whore by. This naming included the names that we knew Her by in her pain and in Her power. Thus, the Virgin was named as prissy, prude, cock tease, old maid – as well as strong one, independent, whole to herself. The Whore was named, among other things – slut, castrating bitch, home wrecker along with priestess, tantrika, mother, compassionate one. I had also asked that during the pujas, the participants meditate on the ways they had experienced these energies in their own lives.

When I sat at the altar of the Virgin

I thought of all the women who had been killed for not having an intact hymen at marriage. I thought of my shame at losing my own physical virginity, and wondered if that contributed to the loss of my emotional virginity, my personal sense of being an intact separate person. I noticed that this altar had less of an energetic charge, as well as less elaborate decorations and fewer personal objects than the Whore altar had. It seemed that the participants were putting more energy out to the Whore.

At the altar of the Whore

I thought of my hatred of the high school slut, the one who stole my boyfriend. I thought of my anger at the men who have used my body but ignored my heart. I thought of the fear I have lived with that my husband will be stolen by another woman as my father was. I thought of the pain I felt when I heard a rumor that some women were angry with me for my unabashed belly dancing around a fire circle. I came to know the pain of the Whore. She has been hated by her sisters for expressing her beauty. I have hated Her, and I have been hated. My tears at each altar added to the tears that had been shed by others all day. The ritual had begun.

At dusk, we gathered at the altars.

There were the Priestess of the Virgin and her Priest, the Priestess of the Whore and her Priest, and myself as the center Priestess who would be embodying the synthesized energy at the end of the ritual. We gathered the participants, the Priests picked up their pieces of the statue, and we began the procession down to the main circle. Once in the Circle, back in the cauldron of creation, we harmonized our voices in preparation for the work. The drumming began, the heartbeat of the Goddess, a slow steady build up that would culminate later (thank you drummers; you did a great job!)

Here she spoke to us of her nature. Her exact words escape my memory, but she spoke of herself as she who is ever new, ever intact, unmarried and strong. She asked the participants to speak to her of her names in her pain and in her joy. Here, the participants were to recall the words they had put on paper at her altar, and shout them out, pulling from within themselves all the emotions that were linked to the archetype, so that the emotional energy would be available when the link was made. The people did shout out the words, but my sense was that the energy did not really build up into the hefty charge I had hoped for. It seemed that people were holding back, or not connecting with the archetype. I wondered if the group felt that the Virgin was a boring energy. The Priestess then gave them a touch to the Heart center and they passed on.

The Priestess of the Whore

The participants were then directed to the altar of the Whore,where her Priestess awaited and spoke to them of her nature, her pain, her power. She spoke of her wild abandon, her passion, her desire to experience all, her need to be loved. She asked the participants to name her in her pain and in her power. The energy began to build. The group began to dance as even the drummers got entranced by the seductive power of the Whore. The group shouted out her names and cried out with the power. It felt thick and was almost visible to me. I watched some people shrink back in utter terror, while others moved in close to be touched by her. It was clear that this group put more energy out to the Whore, and I was nervous that this ritual might reinforce the split rather than create the unity that we were seeking. When the energy settled down, the Priestess gave them a touch to the Sexual center and they passed on.

I directed the group to walk around in the circle while they chose which altar they needed to remain connected to in order to form the final link. I spoke loudly of the difference in the energy that was raised at each altar. It was like the difference between a convent and a brothel.

“This vast abyss between the energies we felt at each altar is the territory we must cross in order to form the link. This is the split that we must connect! We have created it here in order to bridge that vast distance,” I shouted over the loud drumming. “Choose the altar that you need to be at, but remember that it is not necessarily the one where you felt most comfortable and most connected. Go to where you felt you were most imbalanced, to where you felt least familiar.” Not surprisingly, the larger percentage of the group chose to remain at the altar of the Virgin, and by this act alone, I felt that the earlier imbalance had been redressed and that the ritual could accomplish its purpose. Each Priest then spoke of his role and reminded us once more that this split was within the consciousness of each gender.

We began a slow circle dance, an inward moving spiral, with drumming and the following chant: “Ellelit Virgo, Ellelit Babalon, Ellelit Kadesha” (Goddess Virgin, Goddess Whore, Goddess Whole). The Priests each took up their statues’ pieces and led the group.

During this dance, I worked to pull in the energy that the group was carrying, focusing on weaving it together as one, as the Priestesses also worked on holding their energy and directing it inward. As the group danced closer and closer to the center in which I stood, I felt a tremendous charge building.

When the Priests had almost reached the center, I signaled for the Priestesses to walk into the center towards each other. They began a slow approach. As they reached each other, they embraced, the Priests reconnected the pieces of the statue and placed it in my hands, and the drummers hit a wonderful crescendo. These three events happened simultaneously, and the group as a whole dropped to the ground to focus the energy.

The Words Of The Whole Goddess

After a few moments, a single drum began the heartbeat, the Whole Goddess arose within me to speak these words from “The Thunder: Perfect Mind”:

Do not be ignorant of me

For I am the First and the Last

I am the Honored One and the Scorned One

I am the Whore and the Holy One

I am the Utterance of my Name.

When I came out of the trance, I looked down and saw my two friends who were the Priestesses embracing closely on the ground, and crying. Through my own tears, I saw them, these two women who are so dear to me and onto whom I have projected my own Virgin-Whore conflicts. I wondered if they truly understood how deeply they were helping me heal myself. I wondered how I could ever thank them.

I looked around and heard many tears. I felt so much love for this group that would give me the space to do this work, that would participate deeply enough to heal themselves as well. I felt a new energy in my body that was as yet unexplored. I remembered to remind the group that this ritual may have stirred up many deep conflicts, and that we needed to be available to each other for post ritual processing should the need arise. And then the group rose up into a passionate group hug and the chanting continued for a spell.

Just a short time later, my friend Kether, who had Priestessed for the Virgin shouted at us to look at the sky. There was a long stream of cloud or vapor (or something) linking the planet Jupiter to a star way on the other side of the sky. It was astounding. “Looks like someone linked something somewhere” she said. What else was there to do but believe?

[What are your thoughts about this ritual? Your feelings? Do you think it should be done again?
Please share.]

The preceding was originally printed in Mezlim magazine. The author, Tara Webster, was a dear friend of Kathy’s who is now among us only in spirit. Her inspiration for this ritual was also the inception of LumensGate. So it was an amazing birthing – of many powerful pathways. And an incredible thing about what follows is that this ritual was created, performed and documented in 1991 – more than 20 years ago. Yet it remains as powerful and relevant now as it was then. Please see the previous post for Tara’s inspiration and the foundations of this ritual.

Any cookies that may not be particularly necessary for the website to function and is used specifically to collect user personal data via analytics, ads, other embedded contents are termed as non-necessary cookies. It is mandatory to procure user consent prior to running these cookies on your website.