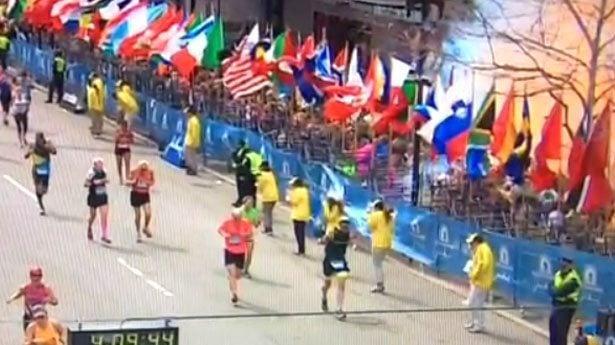 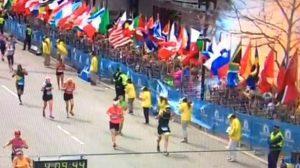 Yesterday, my city went through a major man hunt.  The bombings of the Boston Marathon and the subsequent murder of a security guard at MIT, brought terrorism into stark focus in Boston.  Major portions of the city were asked to stay at home with their doors locked so that the risk of civilian casualties would be minimized as they hunted for the remaining bomber.  Police went door to door searching for the man.

I have two perspectives to offer here – one on the physical plane and one on the spiritual.

The first thing I want to say is “Thank You!” to the brave men and women who put their lives on the line yesterday in pursuit of the public safety.  I want to be clear that what I am about to say has no reflection on any of the individuals involved and that I am whole-heartedly part of a grateful city for their tireless efforts to put this ugly chapter in our collective lives to a close.

And yet – I cannot help but look at the events of yesterday through the eyes of history.  Asking people to stay home was a reasonable and prudent request.  It was a small sacrifice that we as the many made to allow those whose job it is to protect us to ferret out the wrong-doer.  But here’s my challenge.  They went door-to-door to do searches.  I have no idea what their procedures were, but given my understanding of the legal system, I’d assume that they asked each person if they could search their house and if that person declined (which legally they had every right to do), then they added them to the list of people to look at, investigate, and potentially apply for a warrant to search anyway.  That’s a little scary isn’t it?  That you could be minding your own business and because the bomber chooses to hide in your neighborhood and you choose not to give up your right to unlawful search, you could become the target of an investigation?  It gives me pause.

Was the tactic expedient?  Certainly.  Did it prevent future violence?  I have no doubt.  But at what price?  I cannot help but think of the quote from one of our founding fathers:

“They that can give up essential liberty to obtain a little temporary safety deserve neither liberty nor safety.”
Ben Franklin

I had a discussion with my house mate this morning about gun control, rights to privacy, the right to a free press (the internet now – don’t imagine the news stations are serving this purpose) and free speech, and our right to not have to submit to unlawful search.  Normally, I am a bleeding heart liberal, a democrat to the core.  I have petitioned for same sex marriages, the rights of transgendered people to have equal housing opportunities, and participated in Democratic campaigns.  But on this issue, I side squarely with the Republicans.

Our right to bear arms, our rights to privacy, and our rights of free speech and freedom from unlawful search are what keep our government honest.  If you look at history, the major tyrants all began by taking away or severely restricting those freedoms.  The random extremist group, the occasional terrorist strike, the hate language, and the like are all the prices that we pay for those freedoms.  Our founding fathers knew that.  They created our constitution and the bill of rights in an environment of revolution against a tyrannical king who did not have the people’s needs at heart.  The big corporations who put profits over common good are that king in our country today.  The influence they have over law makers is large.  We cannot ignore that the situation in our country is reaching the point where a little revolution might actually be called for.

And if we allow ourselves to give up our constitutional rights to obtain a little security, we won’t have the resources we need to keep our government honest.  Situations like the ones we in Boston have experienced this week happen rarely – and that is a testament to the tireless efforts of our law enforcement personnel.  They do a fantastic job on a daily basis to keep us safe.  If I have to risk being a little unsafe on the rare days when someone gets something by them, that’s a risk I’m willing to take.  Because those days are rare and the effect that us having these rights has on the government keeps it honest on a daily basis.  To me, it’s a no-brainer trade.  But then, Ben Franklin and I have seen eye-to-eye on many things – not giving in to fear being a big one.  And that brings me to the spiritual side of the coin.

Yesterday, the media and the lockdown were spreading fear. I did my part by reaching out and pointing out that the average person being asked to stay in their homes was not at risk and that therefore fear wasn’t necessary.  Nonetheless, those watching the news had the sensationalism amp up the energy of fear.  To Boston’s credit, we’re a town of scrappers and for us, fear quickly gets sublimated into anger.  It’s obvious that we are descended from those first revolutionaries because when the going gets tough, we pull on our big boy/girl pants and get going – the reactions from those who ran towards the explosions on Monday to help those who were injured showed that.

And yet – it is fear that causes us (not just Boston now, but the whole country) to make rash decisions.  Look at the Patriot Act.  In the wake of 9/11, we signed away significant civil liberties because we were afraid.  Yesterday, people gave up their right to privacy to help the search.  (A choice I too might have made in the moment, just to be clear.  I’m not condemning those who did, just questioning whether they thought it through and realized what they were giving up before making the choice; or whether the fear – or its resulting anger – was enough to make them capitulate.)

Spiritually, what I want to say is this.

Your personal power is dependent upon your ability to control your own fear.

Turning the fear into anger keeps you in motion, yes, but it still puts you in reaction to the events, rather than a choice based on your own power.  Personal power is about acting from what is right for you as a person and as part of a larger community.  It is about clear-thinking and purposeful action, and if you allow someone to whip your emotions into a frenzy, you give them your power.

Expressions of loathing and hatred, the comments about hoping the police would kill the bomber rather than take him into custody, the angry outcries of “this shouldn’t happen!” were all made by people who had allowed fear to morph into anger and then allowed that anger to overrun them.  They were no longer in control of their own power.

Should bombings happen?  Certainly not.  But then again, I don’t think my loved ones should die either and yet eventually, we all do.  Some things just are.  We do our best to prevent them, we take precautions, we are careful.  We do our best and sometimes it’s not good enough.  That’s life.

Personal power is about accepting what is as quickly as possible and getting back to your own center.  It is only from this powerful center that we can make any changes that need to be made as a result of events before us.  Sometimes there is a change to be made.  Sometimes there isn’t.  If we make decisions from fear, we insist on change in an effort to feel in control again.  We try to control the outside world when we choose from fear, rather than focusing on the important aspect of exerting control over our inner world.  The result is often over-regulation on one end of the spectrum and tyranny on the other.

What is my point?  It’s just to raise your awareness.  It’s to open the conversation in your head – and perhaps to incite conversation with others.  It is up to each person to decide how influenced by events they will choose to be and to act accordingly.  I’m just asking you – how much of your personal power are you willing to give away?