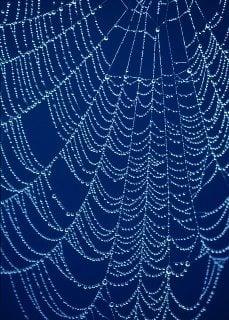 A woman who could not get past her fears, prayed to the spirits to help her.  “Oh spirits, why am I stuck, unable to move, despite my wishes to make great leaps forward?”  In answer, the spirits passed their hands across the fabric of her vision.  And where their hands passed, threads appeared – more threads than she had ever seen before in her life, going in all directions, crossing at seemingly random places.  Most of the threads connected to her.

“No one has done this to you” answered the spirits.  “This is the nature of who you are.  All of life is connected through these cords that you see around you.  If you were to be loosed of your bonds, you would cease to exist in this world.”

“I don’t understand” she said.

“Try moving” they replied.  She moved her arm and saw that, as she did, some cords flexed and moved easily, and others were already stretched taut and resisted her movement.  She moved her leg and the same thing happened again.

“The ones that resist are the threads that connect you to people, ideas, assumptions and beliefs that hold you in place. You must either break those cords or remain where you are.  The choice is yours.”

She moved her arm again and watched how that movement rippled outwards across the web of cords that surrounded her.  She moved her finger and saw that even that movement had an effect on the whole.  She realized that each cord was not just loosely attached.  Some pulled in one direction or another.  Some were comfortable, others itched and burned.  Some cords twisted tightly around one another, others existed almost in isolation.  She could not imagine what would happen if she broke a cord.

“The web you see around you is the web of your life.  If you break a strand, the rest of your life must adjust to compensate.  Some changes have little effect, others change the nature of the web.  You are stuck in fear because you are unwilling to accept the changes to your web that your choices would create.  That too is a choice, but one we fear you may not be happy with in the end.”

“I understand” said the woman.  And before she could change her mind, she cut the strands that chafed, the ones that burned, and the ones that held her in place.  She made a choice to change – and her web was never the same again.”

If you need to make changes in your life and you’d like some support in the process, schedule a coaching session.