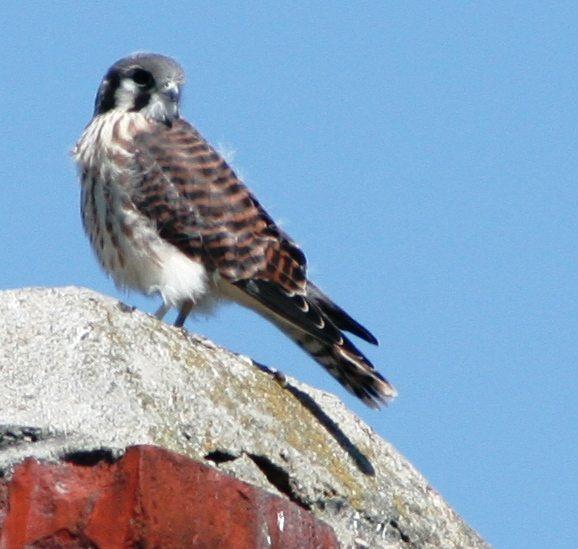 I run a drumming circle every month.  We play African, Middle Eastern, Native American and Brazilian drums.  It’s an exercise in creating shared space, listening, contributing and being in community.  As part of this event, I create a central altar space – a place to hold the intentions of the circle.  Usually, it is a piece of cloth on the floor with feathers, crystals, pictures, statues, stones, etc. arranged in a design.

This month, I decided to put “new beginnings” into the center of the circle.  I started setting out the materials I would use in the altar.  As I was laying out the items I would bring with me, I heard a strange bird call outside my window.  My roommate came to get me, saying that there was a peregrine falcon that had landed on the house next to ours.

Don (my honey) rushed to grab his camera and get a picture.  Here is the picture of the falcon:

According to Whats-Your-Sign.com, this is the meaning of the peregrine falcon:

“At its core, the Falcon animal totem represents visionary power, wisdom, and guardianship. This powerful bird awakens visionary power, and leads you to your life purpose. The Falcon carries with it a message of transition and change – perhaps in your vocation, work, career, etc.

The Peregrine Falcon lives up to its Latin name: Falco Peregrinus which means foreigner or stranger because it is a migratory bird rather than sedentary – it is found throughout the world and tends to travel great distances.

The Peregrine is most often used in falconry due to its keen intellect and incredible ability to calculate or judge its prey.

Falcon animal totem s encourage us to calculate and strategize. If we have a goal, Falcons beckon us to make plans and strategies to obtain these goals. Falcons are all about focus – strong, one-pointed focus. When they show themselves to us, we are being called to focus on our desires and our goals, and do what is necessary to bring our desires into our reality.

The fact that the Falcon is a solar creature could mean there is something in your life that you are highly passionate about, and the Falcon is asking you to take action on this passion. But be smart about it – don’t jump into something without doing research and planning. Make your passion a reality by persuing it methodically and as stratigically as the Falcon would persue his hunt.”